"WRITTEN BY BLOOD PART ONE: CONVICTION" by Dwayne Gill

Posted by Matt McAvoy on Thursday, November 22, 2018 Under: Book Reviews 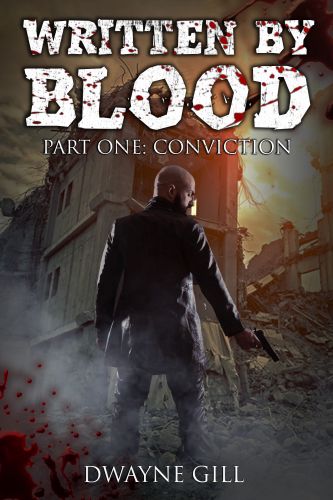 I’m always a touch wary when reading a book, the title of which includes the words “part one”, having been left hanging on many occasions by infuriating and sometimes ridiculous cliffhangers.  However, this is not one of those books, I’m pleased to say; I don’t think I’m spoiling it in any way by saying that “Conviction” is satisfyingly self-contained, whilst leaving a tantalising hint at the bigger picture of the series generally – as Marcene says: “A storm is coming”, and you do indeed sense this throughout the book and at the conclusion of this instalment; something more grand and something menacing is definitely brewing in the background, if not yet ready to reveal itself.

If not particularly outstanding for any reason, “Conviction” is certainly an entertaining actioner, formulaic, in the usual three acts, with all the elements you would expect from that: a tough bad guy, sinister high-level corruption, a vulnerable protectee (or three or four) and an elusive link to a threatening past.  Add to this the spectre of a deadly super-villain with epic (and surely terrible) plans, and you have a pretty entertaining book, in the vein of Childs or Koontz, which is definitely worth a read.  “Conviction” is action-packed in all the right places, yet timed and paced well; so well, in fact, as to incorporate its plot, sub-plots, and backstories, all within an enjoyable 170 pages.  Add to this an ensemble of genuinely layered and thought-provoking characters, whom Gill knows well, and you get a lot packed in to this relatively short book without overkill.  The action scenes are rousing and satisfying set-pieces, and the moments in between are genuinely poignant; despite the machine-like persona of the principle, Cane, you do find yourself empathizing with him for that very reason.

Gill is a good author, with a professional approach to fiction writing, whom I wish well.  His addition of the optional free download of a couple of short stories, to enhance the backstories of two of its main characters, is a nice idea, which I liked a lot; executed well, it doesn’t come off as a gimmick, but as a great little bonus, which adds to the book.  Hats off to him for crafting (and crafting well) a promising and engaging series, and a strong start with this instalment.  If you like action thrillers with a slightly futuristic, Crichton-esque twist, I strongly recommend Dwayne Gill.

BUY IT FROM AMAZON >