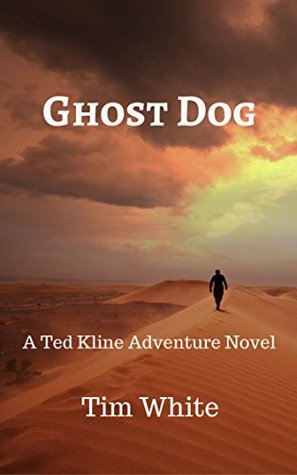 “Ghost Dog” is a pretty entertaining, gripping crime adventure story, with a short enough word count to fit in over an evening or two.  Tim White is a pleasant and engaging author to read, though, although - for the most part - well-written in good, articulate English, his language may be a touch simplistic in nature for some; if you are expecting a dark and downbeat crime drama, you will not get that with “Ghost Dog”.  Instead, it is a quickly paced and very dialogue-driven small-town cop tale; the dialogue is inoffensive and the violence restrained.  Although not overtly faith-driven, the Christian influence is visible in “Ghost Dog”, and most of the first third of the book is little more than character development and informality, to perpetuate the virtues of Sheriff Kline.  Overall, it is a nice read, but the problem is that in a relatively short book it assigns a proportionally short amount of content to the real story.

In some ways, perhaps, I felt the book, with all its affable character interaction, was a touch too light-hearted for the overall topic.  Tim writes about what is a very dark and serious subject matter - young girls being abducted, abused and forced into the sex trafficking industry - in a narrative sometimes reminiscent of the YA and adventure genres: much lightened and less disturbing than other authors often choose to make it.  I understand this is intentional, and the author’s preference is not to bring too much darkness into his work but, of course, trafficking is what it is.  In fairness to him, his loathing for the industry is apparent throughout, and I think it is to his credit that he doesn’t wallow in the violence or the depravity that goes with the work of these gangsters.  He explores instead, if only superficially, the background mentality behind their unempathetic approach to their victims; Tim clearly has an interest in the mis-development of youth as a precursor to crime.  I wonder if perhaps more could have been made of this, at a psychological level, by developing the villain’s backstory a little more, though I acknowledge that to do so may have afforded Sobaka a little too much sympathy.  The book’s opening chapters, about a teenage burglar, who is put back on track by the Sheriff with no more discipline than kindness and words, are something of a metaphor for the damage which has befallen the neglected Sobaka, even if the author didn’t intend them to be.

Whilst I would recommend a proofread, to clean the book up a little, overall “Ghost Dog” is a decent enough way to spend an evening, without having to worry about shutting yourself off, or becoming too intensely engrossed.  We all know how unpleasant and evil the world can be – Tim is just trying to face up to this in a way which enables him and his reader to find a little happiness as they do so, and I appreciate that.  If you like inoffensive, gripping crime adventure, I suggest that Tim White’s books are a good place to start looking.