"Monoland: Into The Gray Horizon" by E.A. Minin 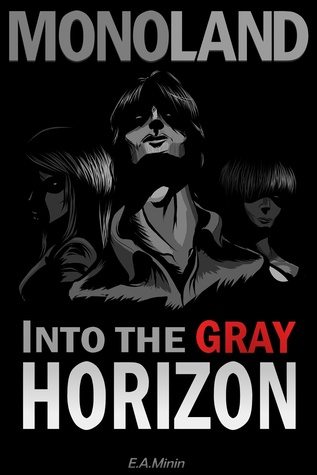 I was drawn to “Monoland: Into The Gray Horizon” by the cover and the premise: that of a young man trapped in a “land of grey”, immediately following the moment of his death.

“Monoland” is another name for Purgatory – it is neither Heaven or Hell, but a biblical world in between, which runs parallel to our own dimension, here on Earth.  The book deals with some interesting concepts: the feelings of love and loss, the realization that eternity is forever, and a being has to carve out his or her “future” in it, and even that there are those unable to cope with this existence, who choose, instead, to drink and fritter their eternity away.  Most surprising is Minin’s somewhat sad idea that petty differences like greed and jealousy are not things we leave behind when we die – I hope, in this case, he is wrong.

The book is told in first person narrative, drawing the reader into a very empathetic situation, and includes some very interesting set-pieces, some of which betray the eastern European, or perhaps middle-eastern, source of its writer’s origin.  Still, its universal concept translates well, and one thing is clear very early on; Minin has worked extremely hard to ensure a high standard of writing in the English language.  The book is very well-written, produced to a high quality in all respects, the characters are well-developed and three-dimensional, and the events interesting and intriguing, flowing along a satisfying timeline.

The story, which revolves mainly around the lead character coming to terms with his loss, while choosing an afterlife “career” from a choice of three, is told well - emotional at times, with a great deal of humility and humour.  When it is revealed that “Monoland: Into The Gray Horizon” is the first of a series, and concludes progressively, this is not disappointing for the reader – by this point you have struck an affinity with the main characters, and want to know what comes next, in a story of literally eternal possibilities.  The book is written in such a voice that getting through those 300 pages wasn’t a struggle, and you’re ready for 300 more.  E.A. Minin is a very good writer, with a real flare for the humanistic, and I look forward to reading the next in the series, to discover the fate of Owen and Dizz.