"Payback: Tales of Love, Hate and Revenge" by Steve Bassett

Posted by Matt McAvoy on Tuesday, October 29, 2019 Under: Book Reviews 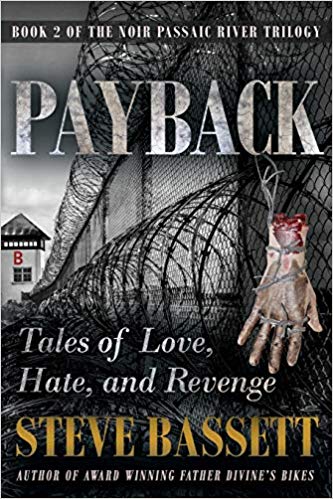 Unlike its more journalistic predecessor in the series Father Divine’s Bikes, there is a more discernible air of ‘forties noir pulp fiction about this book.  Whilst its prequel focused heavily on cultural differences and animosities, this is more story led, with a greater role on crime fiction, and more prominence given to two of its resuming lead characters, detectives Nick Cisco and Kevin McClosky.  Other than this, the intertwined stories, subplots and backstories have only the most superficial connection to the first book, in that it is set in the same melting pot of a neighbourhood in Newark, New Jersey, in 1946.  Overall, though, this can truly be considered a stand-alone book, and there is no necessity to read the series in any particular order up to this point.

The stories are good ones: a diplomatic but far from by-the-book cop trying to solve the grisly murders of three U.S. based Nazis; a decorated black war veteran whose attack on a racist landlord risks causing a race riot; a priest’s desperate attempt to rescue a young girl being put into the care of an abusive couple; a tough, battered wife divorcing and fleecing her mafia husband, to fall into the arms of a local police sergeant.  The stories are all connected beneath one overarching tale, though it is sometimes a little easy to forget this and get swept up in them individually.  Cutaways to each are interspersed in long segments, and when the reader is returned to one, it can be some time before returning to the other, which can interrupt the flow somewhat.  For this reason, it can seem a little disjointed at times, and to tell the truth I felt that it may have benefitted far more from a much clearer distinction between the tales, in a more explicitly defined pulp fiction style – perhaps even with separate titles.  Of course, to this end, I do acknowledge that Steve Bassett might not even agree with my suggestion that this is pure pulp.  The timeline is not always linear, and there are a lot of peripheral characters and events going on – indeed, new characters are introduced continually, with rather in-depth dialogue and backstory around them.  For these reasons, I felt that it does not feel particularly fluid, and as the reader I had to work a little harder than I would have liked, at times, in order to follow the overall storyline; it is fair to say that keeping engaged was easier in some parts than others - these particular parts could have been better capitalized upon.

But, apart from this overall observation, it must be said that Payback is right up there as far as professional and serious writing goes.  Steve is an author of quality, no doubt, and this is an extraordinarily well-written, intelligent and highly thoughtful book, if lacking the profound context of its predecessor.  There are one or two tiny issues with the proof, which mar it very minimally, otherwise a very good, high quality read – and from Bassett I expected no less.