"DIE BACK" by Richard Hacker

Posted by Matt McAvoy on Thursday, February 7, 2019 Under: Book Reviews 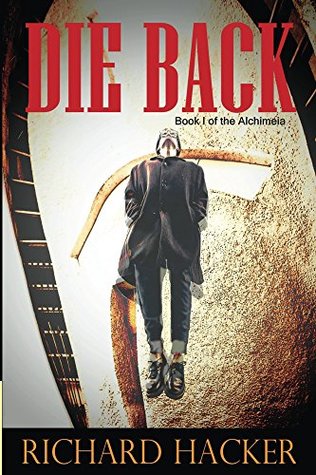 Nicely written by a good quality, professional author, this fantasy is more a time-travelling actioner, which is exciting and engaging.  Richard Hacker has a good knowledge of history, and has done his research very well, but, gladly, doesn’t overplay it – the focus of this book is the formula, with its 3 acts, its heroes, love interest and a ruthless super-villain, who craves no less than total domination of the space-time continuum.

The story is a good, interesting one; the ability of the “Inkers” - to jump through time, into the bodies of various well-known (and not so well-known) historical figures – is crafted by sixteenth century alchemists, and passed on genetically.  The book looks good, seeming to cross a bridge between YA and fully-fledged grown up action, though probably veers more toward the former, with its more simple and genre-appropriate use of language, generally.  The action is pretty violent at times, and the “die back” (the act of dying in the host’s body, in order to return to the present) is quite vivid, and at times pretty sobering; these heroes suffer every excruciating death you can think of, and you experience it right alongside them.

Although Hacker clearly knows his favoured eras, he wears his pop culture fancy openly on his sleeve, and you can see clearly the films and TV shows which have influenced him.  In spite of this, and complementing it well, he injects a very welcome and informed infusion of history; sometimes “Die Back” is a cultural delight to read, particularly the parts set in the ancient past.  I’m not generally a big fan of fantasy, but with its high degree of historical action, this book is really good; with its depth and detail, it is also undoubtedly the result of a lot of hard work.  The reveal of a clever backstory just after midway, and a mistake which causes a rift in the continuum which creates everybody’s worst nightmare of an alternate present, really kick-starts the action, and for a while it looks as if this book is going to get better and better, as it steps up a notch in scale and action.  But, I have to be honest and say that, for me, the last third becomes a bit too sci-fi; the story seeming to veer off a little, rudderless and convoluted – though, that said, if you are a fan of fantasy/sci-fi, this direction may be right up your street.  Hacker doesn’t make it easy for himself in the final third, and perhaps makes one or two minor miscalculations in the continuum’s cause and effect, but for all the book’s ambition and execution, this can certainly be forgiven.  At times, when both lead characters are in the past together, you have to read a little less passively to keep up with the first-person monologue he uses to differentiate their consciousness from the host’s, otherwise, it’s done quite well – switching tense and context continually can often lead to errors, but not from this author.

All in all, this is a good, entertaining journey through interesting characters and set-pieces, and Richard Hacker is good quality; I would recommend it to fans of the genre.