"FORTUNA AND THE SCAPEGRACE" BY BRIAN KINDALL

Posted by Matt McAvoy on Thursday, March 28, 2019 Under: Book Reviews 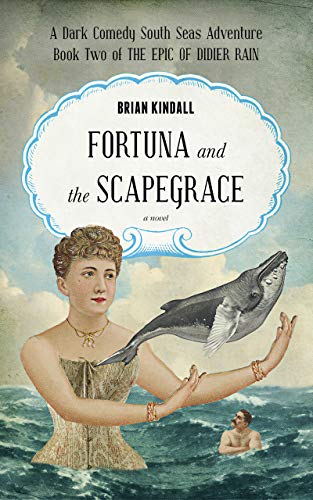 There is a wonderful, melodious tone of voice to Brian Kindall’s writing – his language is always classical and sometimes sublime – the nineteenth-century San Francisco prospectors’ era effortlessly permeates every carefully chose word and sentence and his knowledge of American historical setting appears almost innate, as he places you, vividly at every scene.  In a nutshell, he is a tremendously talented author.

But, as with most creative talents, there is a flaw on the flip-side.  Whilst “Fortuna and the Scapegrace” is generally very amusing throughout, Kindall does have a low-brow tendency to draw his humour from the more puerile of topics, relentlessly taking his amusement from sexual organs, bodily functions and bestiality – this is true of “Fortuna…” and also its Didier Rain prequel, “Delivering Virtue”.  It is something of a shame, that with such an immense creative writing talent, Kindall continuously descends into this bizarre and almost slapstick base humour, which I am of the strong opinion degrades his otherwise high-quality work.

Still, this prudish observation would probably be my one, single complaint in an otherwise pretty faultless book.  Kindall has fantastic theatrical timing, and he is a truly wonderful wordsmith; his prose is poetic and jocular, and his vocabulary is enviable.  The story is a simple one – that of an opportunistic ne’er-do-well who is press-ganged into a mystery ocean voyage, only to assume the identity of his departed friend following a devastating storm.  In typical Kindall style, whilst a marked improvement on its prequel, it does plummet toward its final chapters with his usual unsavoury and absurd boorishness.  Yet, this said, it was gripping and hugely entertaining, to say the least, and I couldn’t put the book down, reading it in two sittings.

“Fortuna and the Scapegrace” is undoubtedly engaging, and with its pleasant tone endears you, despite Didier Rain’s barely concealed repugnance - Didier makes no claims to be in any way decent or noble.  Still, perhaps it is more enjoyable to read than the first, simply because the whole, comprehensive package is just a little bit more likeable.  I have to say that Brian Kindall is growing on me, in spite of myself.  Despite his content shortcomings, his quality is undeniable – there are so many positive aspects to his work, and he is without doubt a “proper” author.  Don’t expect too much in the way of a story, nor certainly many high-brow moments, but expect quality nonetheless – think Rik Mayall’s “Bottom”, as written by the Bronté sisters, and you’re somewhere on the right track.