Posted by Matt McAvoy on Tuesday, December 31, 2019 Under: Book Reviews 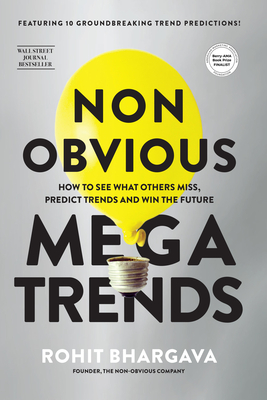 I found this book a somewhat strange one to review – not because of its subject or writing, but because the author opted to send me selected extracts rather than the full book; overall, I estimate I was missing at least half, and have been left to write my review based in the 100 or so pages I received.  Still, nevertheless, I believe I have got the gist, and have surprisingly only found myself choosing to omit one star from my maximum rating for it, which is some testament to its quality.  To a degree, in fact, I would even go as far as to say that I was perhaps a little relieved by this situation, because in a non-fiction reference book such as this one – with an educational / motivational message – the first sections are often little more than large amounts of background page filler to the overall premise, which is usually explored in greater depth later.  Of course, I’m not saying for sure that this is the case with Non-Obvious Megatrends, because I don’t actually know, but I am pretty sure that I got to the crux of it.  What I saw, getting straight to the megatrends themselves, was certainly enough to convince me that this is a superbly crafted, well-researched, hard worked and considerably well written book, by an academically minded professional.

A megatrend is a long-term trend implied in a common theme running between smaller, short-term trends.  From what I can ascertain, the author does not particularly evaluate the validity of these megatrends in any great detail, rather than simply connecting the parts and discussing the overall sum or social movement they suggest: the megatrend.  Whilst Rohit’s revelations are not controversial or challenging in any way, they certainly make interesting reading – and at times quite worrying.  His megatrends are intelligently and intellectually crafted consolidation of his annual non-obvious trend series of publications – as if the author has trawled through his observations every year of the past decade or so, putting them together to compile theories, in what is basically high quality, intensive marketing literature.

Perhaps not indulged in any great detail, however, are the apparent contradictions in the sometimes competing megatrends – or perhaps this is just a sign that society is dividing to pull in different directions of attitude: purists and progressives; simply put, while one megatrend may suggest the embracing of progressing social preferences, another may simultaneously show a desire to reverse technological progress.  Perhaps it is less profound than this, though: perhaps we all just want a simple, happy life.  At this point it should be said that demographic differences are a factor when considering each and every megatrend put forward.  To this end, I did feel that perhaps on one or two occasions Rohit was a tiny bit subjective in his own opinions of their virtues (showing a liberal leaning, obviously) – but, it is his book and his hard-laboured project, so why shouldn’t he express himself?  Besides, his credibility is overwhelmingly supported by the fact that the book is an incredibly professional production, which is extremely well sourced, researched and compiled, and overall the social conscience and message in Non-Obvious Megatrends is there for all to see – and very admirable it is at that.