"Stronger Than Blood" by Allan Mason

Posted by Margaret Walker on Sunday, January 5, 2020 Under: Book Reviews 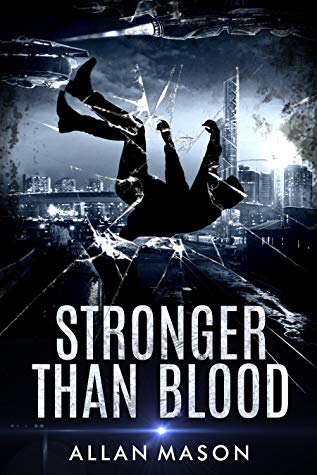 Stronger than Blood by Allan Mason is a complex thriller, devised with considerable imagination, and cleverly written. The author has a firm grasp of the world of electronic manipulation that we live in and a wonderfully warped sense of humour. He has used these skills to morph the present American political system into a new order all too believably.

USA, 2055. Albert Woods lives in Washington in a world of absolute government control. His personal life is overseen by Victor, the interactive technology installed in his apartment, and he works as a programmer in historical revisionism, changing recorded history to allegedly rid America of prejudice and the hate crimes that target vulnerable minorities. The definition of a hate crime, however, ‘is open to interpretation but, ever since the government designated itself the moral compass of the nation, it essentially means doing or saying anything against the policies or laws of the government’. That government is the Party, a merger of the Democrats and the Republicans.

When Albert answers a covert request to meet his ex-wife, he discovers that she is a member of the Resistance that wants to return America to the days when diversity of thought and opinion were not persecuted by ‘the first government not only to control the present and future, but also to control the past.’ The group asks Albert to find them ‘proof that the government is lying to everyone’ by locating any hardcopy in a digital world that could disprove the historical revisions at which Albert is so skilled.

‘Try and find this anywhere online. If you can, I’m lying. If you can’t, the Party is.’

But cabinet member Bob Ritzen has other plans. Megalomaniacs, watch out. Nothing is what it seems. As the intrigue grows, Albert discovers that the Party is aware of the Resistance, and is pursuing and deceiving him every step of his journey.

Mason’s insights into power, control and the manipulation of the public are illuminating. Anyone scratching their heads at contemporary Western politics will enjoy this book.