"MONOLAND: BEYOND THE MONOCHROME" BY E.A. MININ 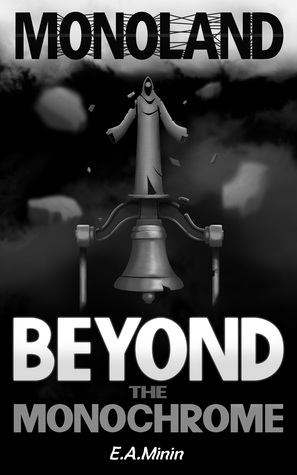 I have been fortunate enough to get first peek at all three books in Minin’s excellent “Monoland” trilogy, and as a collective piece of work, the premise and story are interesting and well crafted.  Bringing a sense of full circle and completeness, “Beyond the Monochrome” is a creative and satisfying end to this mind-bending fantasy saga; in my opinion, it is also the best book of the three.

With the world in the grip of nuclear war, the grey afterlife stepping stone of Monoland is facing an existential crisis, just as Owen is finally starting to find his feet.  The huge influx of newcomers caused by the bombs is testing the reapers, harbingers and engineers to their limits, but for others – the unscrupulous and villainous – it is creating new opportunities for greed and power.  There is a sense of Owen maturing and growing as a person in this book, as he faces up to the mistakes and bad decisions of his life and afterlife.  This makes him more personable as a character than he may have been in the first two books, so much so that even his beloved Dizz is warming to him, as did I.  As he now opts to apply his criminal experiences for the greater good, he learns that there is real danger to the inhabitants of Monoland – far more so than the undertakers which terrify him so much.  The way Minin embeds a genuine sense of threat despite being amongst the already-dead is quite something.

I have watched this wonderful author grow in stature, confidence and quality as a writer, over the course of the series.  He is an extremely creative, highly intelligent mind, with great attention to detail.  He doesn’t just weave fantasy - he calculates, prophesizes and philosophises it.  The final chapter and scene of this final book is no less than a revelation, epic in scale, and a fitting ending to Owen’s experiences in Gray Horizon.  “Beyond the Monochrome” is not a stand-alone, self-contained story in the series – it is very firmly a culmination of the trilogy, and like “The Shimmering Mist” before it, readers should not attempt it without first reading its preceding parts, as much of it won’t make a great deal of sense.  However, as well as being the best episode, the series is much enhanced as a whole because of this final chapter.

Minin deserves renown as a fantasy author and I wish him all that he can get; I will look out for more from him in the future.