"HAPPINESS IS JUST A PILL AWAY" by David Grad

Posted by Matt McAvoy on Wednesday, December 20, 2017 Under: Book Reviews 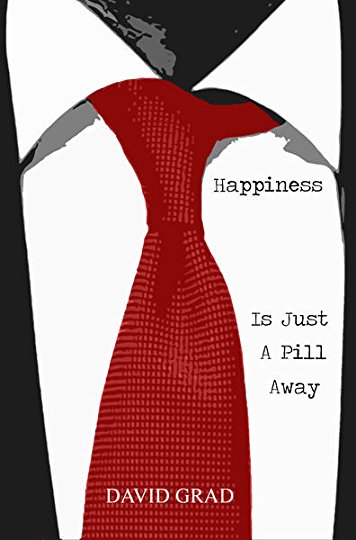 This hugely impressive book is a very cynical, bittersweet and, at times, funny attack on the drudgery of the 9-5 day-to-day, compounding the constant disappointment of underachievement, in a society based on fallacy, superficiality and promise. A book which is easy to relate to in its hopelessness, and the motivation (or lack thereof) of its unnamed protagonist (/antagonist?).

There are laughs – including some real belly ones - but “Happiness Is Just A Pill Away” is not comedy, as such – it is far too real for that. The witticisms are wry, clever ones – as though the author doesn’t really want you to laugh along, because to comply is contemptible. It is candidly critical of the pretentious relationships between colleagues and peers, and its office culture setting is presented as a metaphor for the inequalities of the wider world generally. The first half of the book is an entertaining monologue of contrition and vitriol, and it is both utterly engrossing and extremely satisfying to observe the way David Grad dissects every aspect of society to its most criticism-worthy denominator, from sexual attraction to obesity, via inequality, injustice and wasted opportunity. It reminds me, to an extent, of “American Psycho” in its prose, but instead of bloodlust fuelling its anti-hero main character, it is frustration. It is wonderful to read, and being a wry person myself, I loved it absolutely.

I wonder if the book might be a touch too real for an American audience, but this side of the Atlantic it is right up our alley, with our sardonic sense of humour and our cynical, dreary outlook. Yet, however insincere a person you may be, once you pass the initial barrage of vitriol, and indulge the antics of a character who refuses to be a sociopath, yet may be just that, I defy you not to find yourself at this man’s level. The book does indeed start to feel more humorous – is this because the monologue grows funnier and funnier, or simply because you are now more in sympathy with the unnamed man, with all his increasingly obvious social anxieties?

Upon reaching the midway point, there seems to be a subtle change in tone, and what was previously deemed wry wit on the part of the unnamed, now begins to suggest itself as something potentially more serious. Grad’s depiction of the decline in mental health of a totally average person, living a totally normal life, becomes detailed and incredibly poignant; he delivers it superbly.

He appears to know his daily misery well, and the psychological insight is outstanding in terms of both his understanding and his articulation of it, whether considered from the point of view of the patient or the psychotherapist. And, despite all its acid, “Happiness...” actually delivers some wonderfully uplifting moments.

David Grad is a fantastic author – eloquent and engaging. His turn of phrase and use of metaphor hit his audience objective right on the nail; his writing style and use of language are a distance above the average, and his use of grammar, along with the book’s presentation, are flawless. He is clearly a very intelligent man, who thinks about things a lot, and places a great deal of effort into his articulation of them, whilst ensuring he is wonderfully easy to read; “Happiness...” engrossed me so much that I read it in just a few hours. In fact, it delights me to say that this superb book is the best I have read in a long time, and I congratulate him.