"Victoria's Voice: Our Daughter's Dying Wish To Share Her Diary And Save Lives From Drugs" by David and Jackie Siegel

Posted by Matt McAvoy on Monday, January 7, 2019 Under: Book Reviews 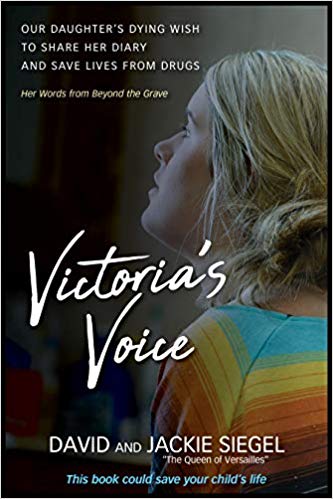 “Victoria’s Voice” is a tragic account of teenage depression and self-destruction, more tragic still because the tale is so common as to seem familiar, even though in reality the world Victoria occupied was probably a million miles from the majority of our own.  It seems very clear, right from the opening paragraphs, that Victoria was another sad victim of the American dream’s flipside, with all the artifice and superficiality that goes with that life of luxury; her death was one of misadventure, brought on by her desperation to escape the life she was in.  Whilst obviously incredibly unhappy – for reasons which may seem clearer to those of us looking in from the outside – and self-destructive, there is no indication in Victoria’s published diary excerpts that she was genuinely suicidal, yet still there seems an air of inevitability about her fate, and others in her environment.  In the book, the parents blame a boyfriend for leading her down the wrong path, but I don’t see it that way (from what limited information is in this book) – Victoria sought out her own self-destruction before this.  Whilst I do not assume the right to attribute blame, it strikes me that surely the purpose of the diary’s publication is to spot where things went wrong for Victoria, in order to prevent other teenage girls suffering her fate.  However, my suspicion is that Victoria’s path was chosen as a direct response to her situation and surroundings, which were not average.

The book takes the form of three elements, the middle section the longest: the publication of the diary, at her request.  I have to say, despite feeling a touch intrusive reading it, I found myself wondering if this genuinely will fulfil her wish.  I suspected, whilst reading, that it has been heavily edited, and its excerpts so carefully selected as to render the diary’s inclusion, to some extent, quite pointless; there is no context of earlier innocence to compare Victoria’s ordeal to, and any hint of blame or reason has been diluted to the point of exclusion.  Therefore, I’m not sure of Victoria’s voice is really heard at all, when all you are really left with is a handful of diary entries about how much she “likes drugs”.  For the real voice, you are left with little choice but to read between the lines.  Whilst it is difficult to see the overall benefit of the diary’s publication in its current form, and it feels that an opportunity has been missed to highlight the social cause of depression in this group of youngsters, ironically, where this book really starts to be worthwhile is after the diary excerpts end.

The book’s other two components consist of monologues by people close to her, which are heartfelt, but the author bios do raise eyebrows very highly; the repeated credentials and achievements of the Siegel family seem irrelevant and more than a little inappropriate.  However, where this book really starts to show value is when it starts to reveal all the work Jackie and David have carried out in launching the “Victoria’s Voice Foundation”, which is a lot.  The final quarter of the book is an incredibly insightful and very useful guide to the most common drugs in use amongst young people and how to spot them.  A huge amount of research has gone into creating this guide, and clearly the information is very well sourced.

Overall, “Victoria’s Voice” is a must-read for any parent who is worried about their teenager’s possible drug use, and definitely provides a first-hand view of how to spot the signs.  However, as far as addressing the causes goes, I’m not convinced.