Posted by Matt McAvoy on Monday, January 22, 2018 Under: Book Reviews 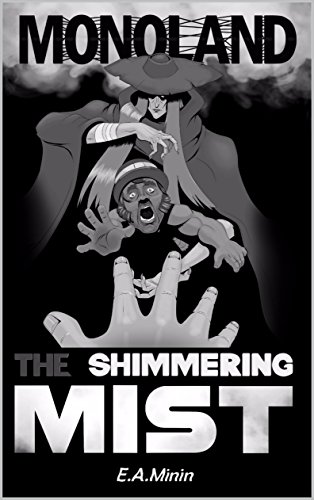 I was delighted when Jevgenijs sent me this sequel to “Monoland: Into the Gray Horizon” – the second in the series – and have been anticipating its arrival for some time.  The first was one of the best, most imaginative books I have reviewed to date, and, in many ways, “The Shimmering Mist” is better.  It picks up at the very moment its predecessor ended, with Owen and Dizz facing imminent punishment by the justice system of their grey-scale afterlife Purgatory.

More so than the first, “The Shimmering Mist” concentrates on a particular structured storyline, unburdened by the necessity to explain detailed concept, context and backstory, which has already been taken care of; Minin does assume you have read the prequel prior to picking this book up, and, in fact, you really should have – reading this as a stand-alone book, you will struggle to comprehend most of it.  The requirement not to recap means “The Shimmering Mist” is a much tidier work, and as a result the tale of this sequel is a simple one: on probation for his actions in the first book, Owen leads a double life – one of afterlife crime on the one hand, and on the other, an incredibly poignant and potentially rewarding journey of redemption, acting as a kind of guardian-angel throughout the lifetime of a young girl.  There is a much darker element in this instalment, the author having found a way around the perception that danger is not possible in the afterlife, by presenting a formidable adversary, and consequences which are thought-provoking, and genuinely quite terrifying.  Much like “Harry Potter” did, Minin has taken his flippant fantasy and introduced an incredibly dark aspect.  You are left, after finishing this book, with a real desire to get on and read part 3.

For obvious reasons, the “Monoland” series has a real sense of melancholy underlying it, and there are moments of incredible poignancy, such as when Owen mentions his mother (particularly in an incredibly sad moment right at the book’s end).  I would perhaps like to see a little more made of these poignant moments, but that might be my desire to cling to humanity while reading the “Monoland” books; ultimately they are quite downbeat, and bleak.  Still, I really enjoyed “The Shimmering Mist”, probably more than the first, because of its simple contrast between the lightness on one of Owen’s paths, and the darkness on the other, without the same multi-grey ambiguity of “Into the Gray Horizon”.  Owen is a layered character, with good and bad characteristics causing his constant internal conflict; Minin doesn’t portray the principal as a decent personality, nor a particularly satisfying one – he frequently seems to waste opportunities to learn from his mistakes, retains his irrational temper, and at one point refers to himself as one of “the bad guys”.  The author has no time for cliched characters, and I like that a lot.  I get the impression that Owen is perhaps based on a person Minin knows well.

“The Shimmering Mist” is very well written and presented, and the author has clearly invested his time and resources creating the best book he can.  One or two of the adjectives chosen may not be my first choice as an English speaker, though all are accurate; I know this is not Jevgenij’s first language – in fact, the book has translated incredibly well.  The author’s writing voice, and the dialogue of the characters, is high quality, whilst the grammar is all but flawless.

If you like thought-provoking fantasy, with a huge slice of melancholy, I highly recommend the “Monoland” series, and I eagerly await the next book in the series.