"AQUILA: CAN SILVANUS ESCAPE THAT GOD?" BY VINCE ROCKSTON

Posted by Matt McAvoy on Friday, June 1, 2018 Under: Book Reviews 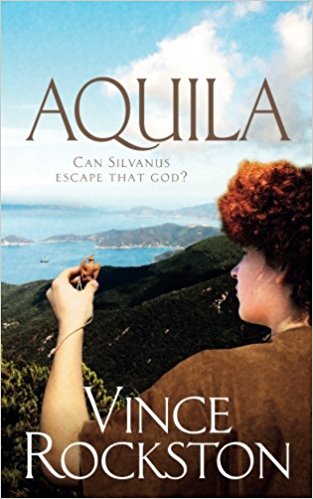 I’ll be honest, “Aquila…” is far from the action adventure I was expecting, and I would strongly advise that to fully enjoy this book, the reader needs to understand what it is about.  In this respect, I would say that the blurb is a touch misleading - there is no action element, and in some ways a huge aspect of historical non-fiction.  I won’t say I was disappointed, because as soon as it become clear what Rockston’s tale is (about midway), I developed a whole new respect for it.

What “Aquila” is, in actual fact, is a spiritual fable, or even a psalm.  Based in pre-dark ages, while the Romans still ruled, it follows one teenage boy’s conversion from fear of his astral gods, to Christianity.  His transition is slow and somewhat reluctant, as he learns several harsh life lessons, over several years; his experiences come to teach him to forgo the trappings and desires of a material life, in favour of the virtues which come from a life of faith, finally embracing the Christian concepts of forgiveness, servitude, compassion and humility.  By the final quarter, this is pure gospel.

I’m not really a fan of religious writing, but I have to say that once I acknowledged and accepted the direction in which it was taking me in, and allowed it to do so, this book entertained me immensely.  Although drawn out, and not particularly eventful, it is a wonderful fable, which skilfully allows the reader into the head and heart of Silvanus.  It is thoughtful and insightful, and portrays a vivid depiction of life in the early centuries after Jesus – Rockston’s grasp of history is astute and very well researched, and you are able to imagine fully the setting and culture of the time.  At the end of the book, a helpful glossary emphasizes the author’s knowledge of history, and of the scriptures.  There are a few issues with some of the punctuation in this book, and occasionally the tense slips from present, but generally it is nicely written and runs at a very palatable pace, which allows the reader to simply roll with it.

I did have a couple of niggling, if small, criticisms: some of Silvanus’s naivety, and his continual questioning of the fairness and inhumanity of everything, grates a touch at times; but, of course, that all serves to set up the virtues of his conversion (and he is a teenager, after all, so I suppose it isn’t inaccurate!).  Another point which made me raise my eyebrows a little is traces of sexuality in the characters, some of which felt a little out of my comfort zone.  And, not to overlook it, why was a Roman scoundrel talking in a Dickensian cockney accent?

Still, these are trivial points, in a largely captivating fable, which clearly a large amount of work has gone into, and Rockston deserves credit where it is due.  This review may appear to spoil a touch, but I don’t think so – in this case I believe knowledge of the subject can only optimize the reader’s experience.  I recommend this book highly, but, to avoid disappointment, make sure you know what you are reading before you do so.