"OFF THE GRID: LIVING BLIND WITHOUT THE INTERNET" BY ROBERT KINGETT

Posted by Matt McAvoy on Friday, March 24, 2017 Under: Book Reviews 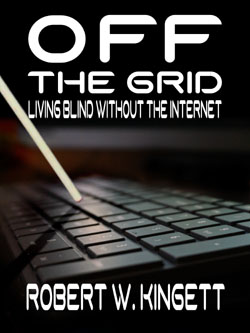 When I first picked up this book my initial presumption was that it was about how vitally important the internet is in the life of somebody with such a debilitating disability, and the struggles of life without it.  Of course, the immediate response to that of most people above a certain age is likely to be that blind people have always had to live without the internet, and it is only very recent times that have afforded the opportunity for the better quality of life it provides.  And while I think this is the basic premise, the book seems to be more a simple observation of the pros and cons of the internet generally.

Robert’s dare seems to be a study with no particular hypothesis, and this, I think, makes it better – it could very easily, and I felt at one stage early in was going to, have become a love affair with ‘old-fashioned’ society and an indictment of the impersonal effect the internet has had on our lives.  But in this light-hearted book, Robert, to his credit, embraces both worlds, and simply explains what is happening and how it feels - I like it because of that.

In doing so, he addresses a lot of issues, some important, some more flippant.  It should be understood that Robert is from the internet generation – his age, blindness and career mean that he spends a disproportionate amount of time online; he utilizes the internet to much more of its potential than many of us.  What is interesting is his observation that he uses the internet more expertly because of his disability; this, of course, is in contrast to the real world, which, based upon his experiences in this book, actually seems to have gone backwards in terms of disabled provision since the rapid advance of the internet – the internet has taken over as the default provider of accessibility for the disabled, and the real world has washed its hands of the problems.  “Google it” seems to have become the standard response to Robert’s enquiries, as indeed most of our own; the denial of any access to the internet is met with incredulity.  Although a fun book, this particular aspect has very serious implications when considering the millions of disabled and elderly who live without the internet every day of their lives.  At one point in the book Robert is advised that if he has no internet access, he needs to find a library and use theirs – this, of course, speaks volumes when told to somebody physically unable to get to a library.

The most interesting, and I guess inevitable effect of Robert’s study is that he examines human nature and interaction much more in the real world.  Clearly, it is not surprising that he finds human interaction much more fulfilling, and actually meets a new boyfriend – this may be incidental or directly related; why not treat ourselves and assume the latter?  He does things he wouldn’t normally do, such as hit the cinema, and has conversations he wouldn’t normally have; these conversations teach him the enjoyment of travelling to the point, not just getting to the point, like internet chatting does.  What is a little more surprising though, is that he realizes that answerphone messages are not a patch on email messages in terms of their quality and provision of content – a good point which I’d never really considered; so, in this respect, and others, the internet itself has some benefit to our interactions to each other.

But, simultaneously, the most damaging drawback is that we have come to trust what people post on Google, than the spoken word – even if that word is coming from the mouth of a trained medical professional.  I myself have actually sat in a GP’s office and witnessed him Google my symptoms!  Other negative traits Robert attributes to online interaction include a couple of serious ones - perhaps more serious than Robert himself even seems to realize: firstly, he is aware that the internet has changed the definition of the word “comment”, which can now actually mean online abuse; in this chapter, his sexuality and the multi-coloured skin and sexuality of his social group is relevant, because they are targets for internet trolls.  The for-granted nature of which Robert accepts this as part of life is particularly sad – unprovoked insult is not something older generations have generally had to grow up accepting.  Conversationally, combining this abuse with the younger generations’ willingness to believe what they read online, seems to me a cocktail for depression and very low self-esteem.  Number one on Robert’s list of concerns undertaking this study, right from day one and until the last minute, is how many Facebook “friends” he will lose by not being digitally accessible, which gives older generations a good insight into how their invention has affected their children.  The second serious concern is that because the internet enables us to get straight to the point, Robert’s generation feel that they are in complete control of the information they receive – I’m not necessarily sure how true this is, considering that information will only consist of that which Google chooses to put on its first page, and may suggest that the internet generation have been brainwashed to think that they are in control, when they are actually perfect targets for marketing, exploitation and propaganda.  Thirdly, a side effect of this quick snippets of information mentality is that this generation are unable to concentrate on anything for long periods of time, and need to be constantly multi-tasking or refreshing their activity – unfortunately, it is difficult to see how this will benefit them in the world.  The main conclusion I took from this book is Robert’s understanding of how many opportunities for real interaction are being missed because of our involvement online.

Generally, this is a good, short book, which I enjoyed.  There were a few frustrating moments of incredulity, such as Robert’s proclaimed ineptness at trying to come to terms with obsolete technology which only came onto the scene a decade or two ago (certainly within his lifetime), the whole caricature of sheer shock in people’s reaction to his deprivation of the internet seems a little far-fetched, and one can’t help thinking that if he was so desperately job-seeking at this time, he would have most likely suspended the experiment in favour of his priority.  The proof could do with a quick editorial once-over and the text is not formatted in any way.  But, if read in the intended spirit, this book is not really to be taken too seriously.  It is light-hearted, fun and very well written, and I think you’ll enjoy it.