"WHEN I TURNED NINETEEN" BY GLYN HAYNIE

Posted by Matt McAvoy on Sunday, March 24, 2019 Under: Book Reviews 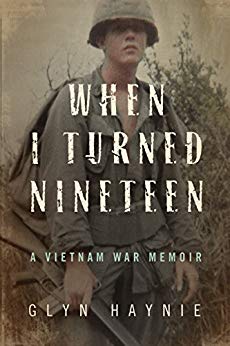 Glyn Haynie is a superb author, with whom I am already acquainted, having read and reviewed the follow-up: “Finding My Platoon Brothers”.  One thing which struck me when reading this book, compared to his reminiscences in the sequel, is that his humanity appears much deeper nowadays, than then at 19 – though perhaps this comes with age; perhaps reflection.  I couldn’t help thinking that very quickly into his tour of duty (weeks, maybe) he appeared already to be desensitizing to the horrors he experience, and the cruelty inflicted upon – among others – the indigenous population of rural Vietnam – he describes such events almost with an indifferent, matter-of-fact tone.  Whilst I am in no position, of course, to judge these men and boys, and truly admire the sacrifices made by each and every one of them, I wonder how much of this dehumanization was an intentional consequence of their war training and how much was a necessary psychological defence mechanism: denial of the reality by justifying it.  Contrarily, Glyn recounts how the American soldiers very quickly found themselves pondering the legitimacy of their part in the war, questioning their own country’s military and foreign policy, and even admitting that their presence in Vietnam was most likely exacerbating, rather than helping the conflict situation – this, almost immediately, has a devastating effect on their morale.  It seems that very little changes in this respect – you can go down to Whitehall (and, I am sure, Capitol Hill) on any given day and find large numbers of people protesting our military presence in some country or other.  Conversationally, many of the objectors encountered are themselves former veterans of war.  It is spirit-crushing to see the futility of the risk and sacrifice to these patriotic, brave young men.

Though Glyn’s account is as thorough a one as you will get about a soldier’s personal experience in the Vietnam war, it would be insightful to know more about these young men’s feelings regarding what they were going through, but I am also very aware that to expect Glyn to reflect on something so traumatic and possibly repressed would be insensitive and grossly thoughtless.  Besides, as Glyn himself probably suspects, we don’t need to be told how the men were feeling, fighting so far from home: the fear and overwhelming awe is pretty obvious, and digging at it unnecessary.  Suffice to say, Glyn’s words sum it up, simply: “I left an 18-year-old and came home… an old man in a kid’s body.”

Glyn has included some wonderful photographs, taken by the soldiers whilst there, and it is good that he has, giving his words an extra layer of poignancy; the smiles and laughter of the men going about their day in the middle of a war zone reminds us that serving in battle is a very real thing, and not just a creative genre we read about or see in movies; in a way, these photographs are as informative as Glyn’s writing.  I would have perhaps preferred to see these photographs organized inline with the text, for smoother handle on context, rather than bundled together at the end of each chapter, but this is only nit-picking.

The outstanding observation when reading this book is the unquestionable quality and professionalism of the men in his platoon, and their undying mutual respect.  Their trust in their superiors and each other is evident, as is their ability to work as a disciplined unit.  They were always willing to help each other, and no request was too much for a team who shared everything without being asked twice (or even once, usually).  Amidst the unpleasantness of the Vietnam war, this is a shining light, and a heartwarming positive, which would change Glyn and stay with him forever.  If anything good was to come from a soldier’s time in Vietnam, in defiance of the bad press and retrospective propaganda about the Americans over there, it is this.  The collective modesty is exemplified by Glyn’s unselfish writing – he allows his platoon brothers to take the reins frequently, in writing this book.  Almost entirely, the reality of pain and suffering is left to be described by the soldiers who lived it, recounting their own experiences – rather than attempting to emphasize the impact of these segments with adjectives and superlatives, he allows his brothers to do all the talking, in letters and quotes.  There is a lot of talk of hate in this book, yet at the same time the aggression is acknowledged to be anonymous and impersonal on both sides, as outlined in Lt. Baxter’s letters home.  The soldiers’ letters home are the book’s standout element, in fact, and Glyn was absolutely right to include them.

The variety of content Glyn employees throughout this book makes it interesting and thoroughly engaging to read.  “When I Turned Nineteen” is vivid and detailed; it is also heartbreaking.  No incident, no encounter is missed out, whether recollections of firefights or just the mundane and routine, and all this adds to the feeling of being right there with them.  The day-to-day is every bit as engaging as Glyn’s vivid depictions of action, of which he seemed to see a fair amount.  For those who have served, this book may help them make sense of their struggle, for those who haven’t, I suspect this is as insightful and comprehensive a Vietnam journal as they will ever read.  Brilliant, as ever, by Haynie.