Posted by Margaret Walker on Tuesday, August 25, 2020 Under: Book Reviews 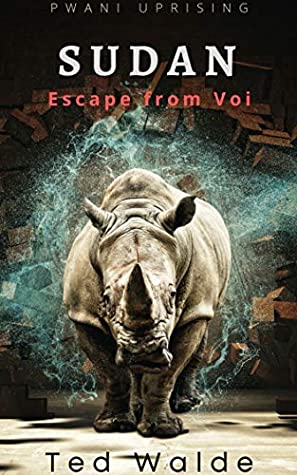 Interesting and original, clever and at times almost comedic, SUDAN, Escape from Voi by Ted Walde is the story of Tawa Haridi, an independent researcher in the field of biomedical engineering who hopes to strengthen the Northern White Rhinoceros in order to protect it from poaching. Unfortunately, his cutting-edge technology has attracted the attention of the Pwani Republican Movement, a paramilitary organization that is planning to secede from Kenya. The very research that is designed to create an impregnable shield over the rhino will be exploited for other, quite nefarious, purposes.  Eugenics raises its ugly head as Haradi is kidnapped and forced to participate in an illegal human experiment.

The plot flows beautifully from one point to another as the intrigue grows, and I was on the edge of my seat wondering what would happen in the end. This shows that the author has a good feel for his story and the emotions that jogged comfortably beside it - an important consideration. It is so nice to read a novel that has effective emotions as well as actions because, in other works that I have read, emotions are frequently neglected in the pursuit of action, and the characters turn into stick figures.

This author has a sense of humour - hurray! Anyone who can maintain an enjoyable degree of self-deprecation whilst unravelling an absorbing plot wins my vote hands down. Written in the first person and well-paced, the story is an easy read, with me waiting in the wings for the next dose of Walde’s lovely dry humour.

Walde develops his characters compassionately. There is a real human feel to the novel that adds much to the pleasure of reading it. The reader engages with the main characters (I felt that three stood out) and so is drawn into their back stories and the pain, relief and hope that they experience. For me, though, it is ultimately the attitude of the author that cements my engagement. He gives a lot of himself to the writing, and so we come to know him through what he writes.

SUDAN, Escape from Voi was a pleasing story to read and an interesting part of the world brought to life by a natural story teller. I believe we have a sequel to look forward to.