"GOD: CHALLENGES FROM PHILOSOPHY AND SCIENCE" By Lynne Renoir

Posted by Matt McAvoy on Wednesday, May 16, 2018 Under: Book Reviews 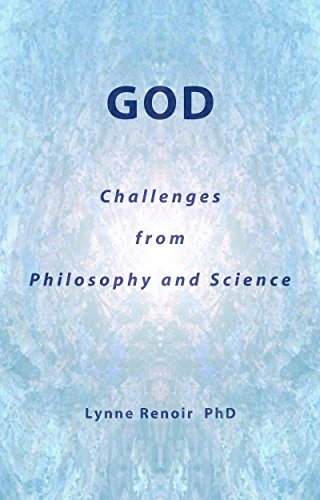 If you are expecting an entertaining theological debate, or easy-reading brain-fodder, this is not the book for you.  What it appears, in fact (at least, the first half), is the publication of Dr. Renoir’s dissertation - a completely academic book, which would serve as a very useful study tool, rather than bedtime reading.  While she is an incredibly well-educated and highly eloquent author, the majority of readers will probably not be equipped to read and absorb such an academic style of writing; very wordy and requiring immense concentration of attention.  I’ll be honest, it lost me frequently throughout, though, I do concede that in my case, as an atheist, the subject matter may have been difficult to digest.

The book is in two halves, the first focusing on philosophical approaches to faith, either supporting or discrediting theological arguments; indeed, there are some very interesting, some a touch worrying, and some downright terrifying philosophical views on religion, sprinkled, thankfully, with the odd scattering of common sense.  The second half concentrates more on the universally fascinating debate of the use of science to support religion and engages more on a general level.  While it is easier to engage with the second half, and is arguably a more entertaining read, in some ways the section is a lot more absurd to attempt relating to; at least, in my view, philosophy and religion are kindred topics – indeed, the former has its roots embedded very firmly in the latter.  Of course, ultimately, as this book reaches its closing chapter, the impossible-to-prove/disprove scientific approach becomes moot, as it reverts, perhaps predictably, to a generic overall view of personal choice of acceptance of faith.

Lynne does not really evaluate the information she presents to the degree you might expect from the blurb, but simply presents the theses of one renowned philosopher after another, and appraises them in a very studious, non-committal way.  I would have liked to have seen more opinion-forming and less ambiguous conclusions from Lynne in each of her chapter summaries – although it may be the author’s intention to impartially present the information, people buy books from authorities on subjects (as opposed to laymen) for good reason: their opinion is sought.  Dr. Renoir is certainly a credible authority – her level of academic and professional achievement is without question, and her capability as a writer equally impressive; I believe she is more than qualified to establish herself as an authority in this field, if she has not already done so.  I do feel she should reinvent this book in the lucrative study-guide genre, and, perhaps, because the dissertational style of this book presents as a study directory, I do think a comprehensive index would make it much easier to navigate, and should be included – I was actually a little surprised not to see one.  That said, as it stands, it is well-sourced and thoroughly referenced – a hugely enviable work ethic has gone into producing this publication.

The book itself is extremely well articulated, although in the version I was sent there were some pretty glaring formatting issues throughout, so much so that I couldn’t imagine it at all being the finalized proof.  Regarding the book’s actual content, I feel I personally can only comment on its quality - rather than its subject matter - which is very, very high.  Still, regardless of one’s acceptance or rejection of the book’s notions, even the most rational cannot be oblivious to Dr. Renoir’s intimate knowledge of her subjects and material - philosophy and religious studies, not to mention astrophysics and other sciences; she has every right to be incredibly proud of this achievement, and all those which have come before it, too.